Home » Philanthropy » The Commencement of the Sydney YMCA

The Commencement of the Sydney YMCA 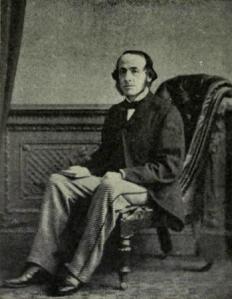 The Commencement of the Young Men’s Christian Association, Sydney (YMCA)

In June 1853, a letter appeared in the Sydney Morning Herald (SMH) encouraging the formation of a YMCA along the lines of that which existed in Great Britain and in Melbourne. This was the first intimation that plans were afoot to commence such a work in Sydney.[1] It seems likely that this anonymous letter was the product of conversations between Samuel Goold, John Mills and John Joseph Davies about the importance of forming a branch of the YMCA in Sydney. In July 1853 and through an advertisement, Samuel Goold sought a copy of the rules and regulations of the YMCA of Great Britain because a similar organisation was soon to be formed in Sydney.[2] The first meeting of the Association was chaired by Goold and was held at his house on the corner of Pitt and King Streets and it continued at this venue for some time.[3] The YMCA prospectus was published on the front page of the SMH in September of 1853 under the Presidency of John Fairfax and with no less than 18 clerical vice presidents. Their presence was designed to indicate the support of the protestant Christian churches and to show that the new organisation would be no threat to them. The treasurer was James Comrie, John J Davies was the secretary and it had a committee of fifteen.[4] The motivation for forming the organisation was

the great want observed to exist here by many persons who are anxious for the moral and intellectual advancement of this country and felt especially by young men who earnestly desire to keep pace with the march of the mind in our Fatherland, seems to be the absence of those helps and guides, and means of improvement, which seek an apparatus as the present Association is calculated to afford.[5]

The organisation was officially inaugurated in Sydney, with its first public meeting on October 5, 1853, and with a lecture given by the Rev George King.[6] It was the arrival of Sharp Hutchinson Lewis and his appointment as Secretary that proved to be critical to the survival of the YMCA at this stage of its life. In London and before coming to Australia, Sharp had been secretary of the Bloomsbury branch of the YMCA and was a close friend of the founder of the Association George Williams, later Sir George Williams. Upon arriving in Sydney on June 12, 1854 and on the day of his disembarkation, he found the group meeting in a room at the corner of Pitt and King Streets and enrolled himself as a member.[7] Sharp was disappointed that it was a weak and struggling concern. Its then secretary was John Joseph Davies,[8] the father-in-law of John Robinson, later to be known as Sir John Robinson. Sharp had observed that Davies had

been asked to take up the work without any reference to the time that he would be able to devote in it, or knowledge of the lines on which the association would be organised. The first time that I meet Mr Davies was at a meeting and when he just put several books on the table with the remark that ‘I thought I would bring these along before I went home’. I concluded that somebody with more time to spare was needed.[9]

The ‘somebody’ who had the time and the knowledge, and as importantly the youthful enthusiasm,[10] was Sharp Lewis who became Secretary in July 1855. Lewis’ first-hand knowledge of what was being done ‘at home’ led them to get new premises and to seek to interest prominent people in the work.[11]

One such prominent person was its President John Fairfax, who said that the YMCA’s purpose was to ‘furnish moral and intellectual instruction of the young men, and to provide a home and friends for those strangers who landed on these shores destitute of both’.[12] As YMCA secretary, Sharp Lewis explained in the third annual report that the YMCA ‘consists essentially of a band of young men who, having themselves felt the love of Christ, desire to extend the knowledge of Him among their companions and young men generally’.[13] The Association was overtly protestant in orientation having been ‘established on the most catholic principles, comprehending every branch of Protestant Christianity’.[14] It consisted of two groups of men, those who ‘give reason to believe that they are truly converted men’ and those who, ‘Christian or not’, subscribe to the reading room. The subscribers could also attend the various ‘self-improvement’ classes on subjects such as elocution, French, photography and Latin as well as lectures on subjects as diverse as ‘the claims of Christianity’ and Geology.[15]

The progress of the Association was slow, but the year 1860 was encouraging with a busy schedule of lectures on various topics. At the annual meeting towards the 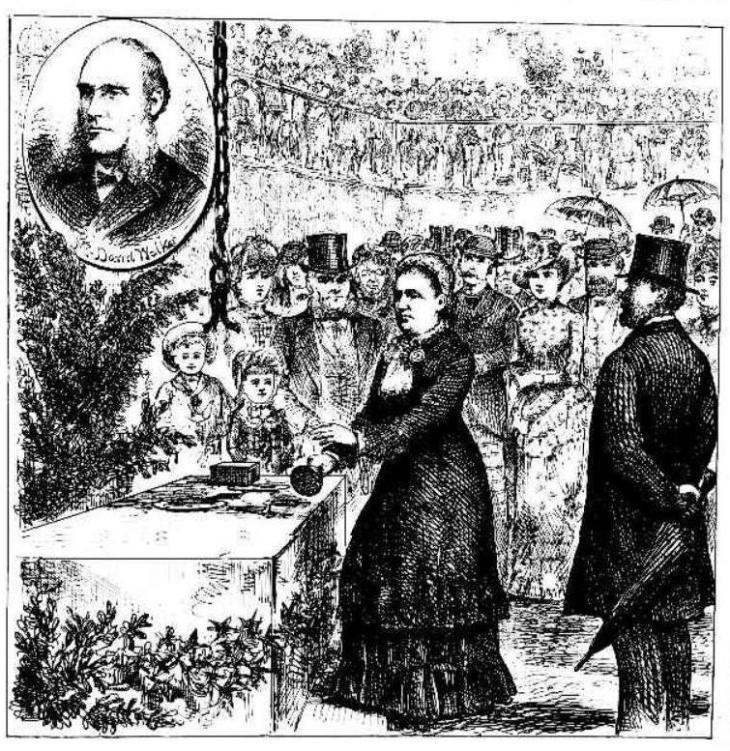 Mrs Margaret Hampson, lady evangelist, laying the foundation stone of the YMCA building in 1883. The inset is David Walker.

end of that year, however, it was noted ominously that ‘the society had worked well and had produced much good; but continuous exertion was strenuously urged in order to make the society thoroughly efficient and self-supporting’.[16] It was noted that ‘as usual the burden falls on the few willing ones, and such men as Lewis[17] have been the mainspring of its existence’.[18] By August 1861, the movement had waned and closed its rooms in George Street and by 1863 the YMCA was virtually defunct. Its library of some 1,700 books, many of a self-improving nature, was sold.[19] The residual funds of the Association were held by its Trustees in the hope that meetings might commence once again.[20] While large meetings were not held at this time nor public lectures given as before, the embers of the work remained. The young men who had originally formed the association,[21] such as Benjamin Short, Walter Buzacott, Sharp Lewis and William F Newman,[22] continued to hold regular monthly morning breakfasts on the last Sunday of the month and by the end of 1869 there were attempts to again revive the work,[23] and the members of the former YMCA agreed to hand over their funds to the new YMCA.[24]

The YMCA had continued to hold its usual monthly prayer breakfasts, but in 1870 publically announced its revitalisation by running a bookstall at the Inter-colonial exhibition in Sydney.[25] By January 1871, the YMCA was again seeking rooms to establish its work[26] and in April it held a public lecture given by Rev John Graham on ‘the inspiration of the Holy Scriptures’.[27] A room was secured in the Temperance Hall, Pitt Street, and served as a reading room and meeting place where classes on various subjects were held.[28] The YMCA had survived its near-death experience and once again began to grow.

Over the next few years the activities of the YMCA prospered with increased classes, lectures and membership. By 1877, a full-time employee was needed and David Walker was approached. In January of 1878, he became the full-time General Secretary, a position he retained until 1902, and with the guidance of Walker and his energetic endeavours, and with the help of others such as John Kent, the YMCA entered a period of vigorous growth and development. This stabilized the YMCA and allowed it to extend its work until it became an effective and far-reaching Christian ministry which benefitted many young men.

[8] Sharp describes John Joseph Davies (1798-1880) as the brother-in-law of John Robinson. He was in fact the father-in-law as Robinson married Davies’ daughter Margaret Emma Davis in 1837. Lewis has confused JJ Davies with his son JH Davies.