Sharp Hutchinson Lewis (1830-1921), Glover and an early Secretary of the YMCA Sydney

Lewis arrived in Sydney in 1854 and went to work with David Jones and Co as planned. In January 1857, Jules Pillet, a highly successful glover at 10 Hunter Street, advertised that he wished to retire and was willing to dispose of his business, The French Glove Depot, with a lease of his premises for six years.[4] On January 1, 1858, Sharp took over the business which, despite some early financial difficulties,[5] he ran successfully for some 16 years. The shop was considered ‘a very fashionable place’ and was just opposite where Henry Parkes had his shop.  Sharp said of Parkes that ‘many a chat I used to enjoy with him in those days. He was a clever fellow’.[6] In 1861, Sharp opened a 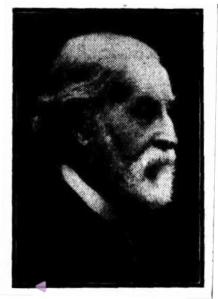 branch in Brisbane advising his customers that he had made arrangements with his predecessor, Jules Pillet, to select the stock which covered a wide range of quality goods from gloves and umbrellas to haberdashery in Paris and London, ensuring thereby that ‘nothing would be lacking in taste and quality’.[7] He finally disposed of the business to his sister Frances Johnson (nee Lewis) and his assistant Edward Carroll in March 1874.[8]

Lewis later accepted an invitation from James Woodward[9] to return to the firm of David Jones, but he did not remain long with his old employer for in 1879 he sold the family home ‘Kentville’ in Petersham for £1,100[10] and went, it was said, on an extended trip to England.[11] But this information is incorrect as he, his wife and three of his children, went to live in Dunedin, New Zealand,[12] where he worked for Hallenstein Bros and Co at the New Zealand Clothing Factory[13] as an Inspector of Branches.[14] During his time in Dunedin, he involved himself in the local YMCA as a committee member[15] and also became the secretary of a company to set up a Coffee Palace which sought to ‘combine all the advantages of END_OF_DOCUMENT_TOKEN_TO_BE_REPLACED

The Commencement of the Sydney YMCA

The Commencement of the Young Men’s Christian Association, Sydney (YMCA)

In June 1853, a letter appeared in the Sydney Morning Herald (SMH) encouraging the formation of a YMCA along the lines of that which existed in Great Britain and in Melbourne. This was the first intimation that plans were afoot to commence such a work in Sydney.[1] It seems likely that this anonymous letter was the product of conversations between Samuel Goold, John Mills and John Joseph Davies about the importance of forming a branch of the YMCA in Sydney. In July 1853 and through an advertisement, Samuel Goold sought a copy of the rules and regulations of the YMCA of Great Britain because a similar organisation was soon to be formed in Sydney.[2] The first meeting of the Association was chaired by Goold and was held at his house on the corner of Pitt and King Streets and it continued at this venue for some time.[3] The YMCA prospectus was published on the front page of the SMH in September of 1853 under the Presidency of John Fairfax and with no less than 18 clerical vice presidents. Their presence was designed to indicate the support of the protestant Christian churches and to show that the new organisation would be no threat to them. The treasurer was James Comrie, John J Davies was the secretary and it had a committee of fifteen.[4] The motivation for forming the organisation was

the great want observed to exist here by many persons who are anxious for the moral and intellectual advancement of this country and felt especially by young men who earnestly desire to keep pace with the march of the mind in our Fatherland, seems to be the absence of those helps and guides, and means of improvement, which seek an apparatus as the present Association is calculated to afford.[5]

The organisation was officially inaugurated in Sydney, with its first public meeting on October 5, 1853, and with a lecture given by the Rev George King.[6] It was the arrival of Sharp Hutchinson Lewis and his appointment as Secretary that proved to be critical to the survival of the YMCA at this stage of its life. In London and END_OF_DOCUMENT_TOKEN_TO_BE_REPLACED