George Augustus Frederick Lentz (1797-1883) Convict conman, Architect and  co-founder of the Institution for the Deaf and Dumb, Sydney

Thomas Pattison[1] is rightly credited with commencing a work that was to become the Royal Institute for Deaf and Blind Children (RIDBC).[2] George Augustus Frederick Lentz and his family, however, assisted Pattison in starting this work and their contribution, though of short duration, was significant. George was born to John and Elizabeth Lentz in London in 1797[3] and he became a musical instrument maker, a harpist and also played in a band.[4] He kept up his musical activities all of his life and was thought by his family to have been a good musician having received a gold watch from King George IV for ‘his performances before him’.[5] From George’s history, if he had a gold watch from his time in England, he most likely stole it for George was a thief and a conman.

At the age of 17 George Lentz, alias George Henry Douglas, was convicted at the Old Bailey in January, 1814, of the theft of a ‘silver watch and gold chain’  worth £4 and of forgery worth £138 in order to purchase a dressing case and gold scissars (sic) and other items.[6]  A newspaper recorded that Lentz

was taken into custody, at the Swan Inn, Knightsbridge, on his return in a gig, with a Lady – to the Lady  (a woman of property) he had given the gold scissars, and she in return gave him as the old song says, “a far better thing,” it was “The ring from off her finger, Oh!”[7]

The combined value of George’s fraudulent activity was a considerable sum for the time and he was found guilty and sentenced to hang, a sentence which was commuted to transportation for life to the colony of NSW. George arrived in Sydney on April 25, 1815, aboard the Indefatigable 2 and was sent to work for James Smith, a builder, at Parramatta. This appears to have been a stroke of good fortune for George as Smith taught him to be a carpenter and joiner. He worked with Smith for at least five years and was described by him as one who was ‘obedient to my order and his conduct was that of a sober and honest and industrious man’.[8] In 1823, he was granted a Ticket of Leave for the district of Parramatta.[9] The ticket was revoked in October 1826, however, as George was found in possession of a chisel, the property of William Clay, which had been stolen with other articles from the premises of Dr Dalhunty at Burwood.[10] A further Ticket of Leave was granted in August 1827, and a conditional pardon was granted in September 1836.[11] During this period George had worked on various building jobs earning praise for his work ‘for correctness in proportion, chasteness of design, and the very superior manner in which it is finished.’[12] It seems his past was not entirely behind him, however, as an angry partner, William Batman, claimed in a newspaper advertisement that George had absconded ‘after having received sums of money on account of work executed by both of us.’[13]

George was constantly in financial trouble as he seems to have been a poor financial manager. He first had his property sold up by the Sherriff for debts in January 1836 then again in March 1837.[14] Around this time, now with a conditional pardon, he moved to Bathurst where he worked as a builder building, among other things, the ‘church and parsonage at Carcoar’.[15] After a few years at Bathurst he was again in financial trouble becoming insolvent in September 1843 to be discharged in December 1844.[16] George remained in the Bathurst area for ‘some fourteen years’[17] until September 1850 when he moved back to Sydney where he styled himself as a builder and then as an architect.[18] In Sydney he had a series of insolvencies: May 1851,[19] February 1855,[20] August 1860,[21] July 1863,[22] and he finally went out of business completely in June 1874.[23]

The detail of George’s personal life after coming to the colony is unclear. Sometime before March 1837, he was cohabiting in Parramatta[24] with Mrs Thompson (nee Mary Ann Johnson), a colonial born daughter of John Johnson and Mary Gatesby. She was born in 1803 at Parramatta and in 1818, aged 16, she married John Thompson[25] with whom she had at least 7 children. Mary left Thompson[26] and lived with George at Parramatta and then went with him to Bathurst in about 1837, returning to Sydney with him in 1850.[27] John Thompson probably died in 1854[28] and Mary, now calling herself Marion, married George in 1855.[29]

An interest in the education of the deaf arose from George’s family circumstances. In 1843, Marion, the then Mrs Thompson, was involved in a court case in Bathurst. It concerned one her daughters who was deaf, Eliza Jane, and Marion indicated that she had ten children ‘three of whom however, were the children of a man named Lentz, with whom she then lived, two other of her children including one by Lentz, being afflicted with deafness’.[30] It is because of this family deafness that George seems to have had an interest in the education of the deaf.  According to Thomas Pattison, he founded a school for the Deaf and Dumb in Sydney (DDI) in 1860, with ‘my trusty friends Mr George Lentz and his daughters kindly assisting me.’[31] The Lentz daughters, who were hearing and who assisted as teachers, were 15 year old Charlotte and then later, for a short period of time, 17 year old Edith. This assistance Pattison regarded as essential to his work. 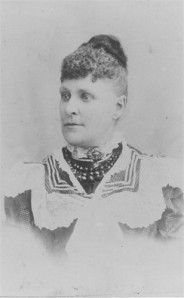 Concerning Lentz, Walter says that ‘his three deaf daughters had been unable to have the benefit of schooling, but his niece Ann Lentz was among the first pupils.’[32] The identification of Ann Lentz as George’s niece is problematic as George seems to have had no immediate family in Australia. Two of the three children of the Lentz family who were deaf were actually George’s step-daughters, Eliza Jane Thompson and one other Thompson girl, with only one deaf daughter being his own child. This was probably his daughter Ann so it is likely that the ‘Ann Lentz’ Walter refers to as one of the early pupils at the DDI was, not George’s niece but his daughter.[33] The Lentz family were a little coy about family relationships. All their children were born in what respectable society would have termed ‘an adulterous relationship’ as Marion, also known as Mary, was still married to John Thompson when she bore the children to Lentz.

Lentz was a more respectable citizen after his marriage to Marion and he became an active supporter of the work of Rev George King and his congregation attached to St Andrews Cathedral.[34] It was not surprising, then, that the source for the governance of Pattison’s deaf school was drawn from this congregation. After Pattison and Lentz had laid the foundation of the school as a private institution from October 1860, a move was made to turn it into a public institution in October 1861. A group of ‘gentleman … initiated this undertaking in a more practical way’ and ‘they were the Rev George King MA, Mr H Selby, Mr E S Wilson, Mr G A F Lentz and Mr F R Robinson’.[35]  All were associated with St Andrews, King as the minister, Selby and Robinson as Church Wardens and Lentz and Wilson as members. King became the chairman of the DDI, Selby the treasurer, Wilson the secretary and Lentz and Robinson committee members. In addition to this, in 1863, Wilson was to become Lentz’s son-in-law through marriage to his daughter Charlotte.[36] At her marriage she resigned her position as a teacher at the DDI and was replaced by her sister Edith. Perhaps as a result of their experience with their father’s constant financial insolvencies, the Lentz daughters were very forthright in complaining about their lack of remuneration and lack of promptness in its payment. This was to be an ongoing source of conflict between the Lentz sisters and the board of the DDI.

George Lentz continued his support of the DDI until 1863 when, in a dispute with the board of governors of the DDI, his daughter Edith (pictured) resigned and the board resolved to have no further dealings with the Lentz family.[37] Edwin Wilson the son-in-law, however, continued on the board until 1866.[38] After this time there is no further involvement of Lentz or his family in deaf education apart from an attempt by Charlotte to commence her own school in 1866.  She had been the first of the Lentz sisters to assist Pattison and now, as Mrs Wilson, she advertised her availability to educate the deaf and dumb. She said she did so ‘at the solicitation of several influential families’ and informed the public that ‘from her great experience in the management of the deaf and dumb, parents may rely on their children receiving every care and attention.’[39] This does not appear to have been a successful attempt to establish a deaf school as nothing further is heard about it.

In his concern for deaf children, George Lentz can be regarded as being part of the philanthropic movement that sought to provide for the education of the deaf that came to be the RIDBC. His motives for doing so arose from his family’s experience of deafness and his contribution was personal and not financial. His involvement and that of his daughters Charlotte and Edith together with his son-in-law Edwin Wilson, though short lived, was probably vital in encouraging Pattison to commence and continue his work.

[5] Interview with Edith Alice Cutler, granddaughter of George Lentz Australian Women’s Weekly, November 24, 1971. He was named after the Prince whose name was George Augustus Frederick. The family recollection could only be correct if Lentz received it from Prince George as Prince Regent as he did not become King until 1820 when George Lentz was no longer in the country.

[25] Thompson was born in 1788 and was convicted in May 1812 for burglary and sentenced to hang which was commuted to transportation for life. Derbyshire 1818, England & Wales, Criminal Registers, 1791-1892 for John Thompson.

[30] SMH, April 4, 1843. It seems that Mary is referring to three of her children being deaf. Eliza Jane and another fathered by Thompson and one fathered by Lentz. She also refers to three fathered by Lentz and these were probably Ann (b. 1839), Sarah (b. 1836) and Emma (b. 1834). Walter also refers to three deaf Lentz children but gives no reference for this statement.  Jean Walter, The History of the New South Wales Schools for Deaf and for Blind Children. (1860-1960) unpublished manuscript [1961] Renwick Library RIDBC North Rocks NSW, 11.

[33] Ann was born November 10, 1839 at Bathurst, New South Wales so if she was a pupil she was a young adult and not a child. Her birth is recorded as Anne A Thompson daughter of John Thompson and Mary but her birth was registered Abercrombie District, Bathurst, and New South Wales Births, Deaths and Marriages Volume Number: V18391168 23A. As Mary had been in the Bathurst district for several years living with George she is thus probably the daughter of George Lentz and not John Thompson. Ann gave the name Lentz at her wedding in 1865.