The Church Labour Home (CLH) owed its existence to the Venerable Archdeacon John Douse Langley. It was founded by Langley in 1891 with ‘the view of assisting a class entitled to the deepest sympathy … those poverty stricken- genuinely desirous of work but unable to obtain it’.[1] 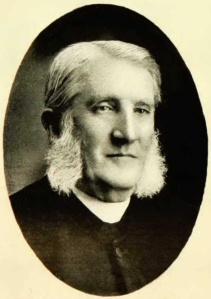 Langley was born at Ballyduff, County Waterford, Ireland, on May 17, 1836, and was the son of Henry Langley and Isabella Edwardes Archdall. He graduated from Trinity College Dublin in 1853 and arrived in Sydney with his parents and four siblings in December 1853.[2] He associated himself with the fledgling YMCA and for a short time was joint Honorary Secretary with Sharp H Lewis.[3] He contributed to the ministry of the YMCA in this role for some two years and also conducted an evening class in mathematics for the YMCA.[4] Langley was an employee of the Bank of Australasia from about 1857 and around 1858 or 1859 was appointed to look after the branch at West Maitland[5] where he remained until 1868 after which time he moved to the Newcastle branch. He was the manager there until he resigned in 1872 in order to enter Moore College to train for the Anglican ministry.[6] Langley was ordained deacon and later priest in 1873 and served as the incumbent of Berrima with Mittagong, 1873-75; St David’s, Surry Hills, Sydney, 1875-81; secretary of the Church Society, 1880-83;[7] and rector of St Phillip’s Sydney, 1882-1907. He was elected the second bishop of Bendigo and consecrated in January 1907, resigned from the diocese in June 1919, retired to Melbourne and died 11 years later in 1930.[8]

Langley was a busy churchman and was involved in many things within the Anglican Church as well as in the community, but in the 1890s he became very involved in assisting the jobless. By 1890, there was a growing unemployment problem brought on by the conditions that led to a major economic downturn in this period. In February 1890, a meeting of about 500 people, chaired by G E Ardill, met to consider the plight of those who wished to work but could not find employment. A deputation was formed, of which Langley was a member, to wait upon the Minister of Works and to encourage the Government to increase employment through a capital works program.[9] More importantly and more effectively, as the deputation did not receive much benefit from its meeting with the minister, a committee was formed to see what could be done in a practical way to assist the destitute unemployed. By the following month, under the chairmanship END_OF_DOCUMENT_TOKEN_TO_BE_REPLACED