The Church Labour Home (CLH) owed its existence to the Venerable Archdeacon John Douse Langley. It was founded by Langley in 1891 with ‘the view of assisting a class entitled to the deepest sympathy … those poverty stricken- genuinely desirous of work but unable to obtain it’.[1]

Langley was born at Ballyduff, County Waterford, Ireland, on May 17, 1836, and was the son of Henry Langley and Isabella Edwardes Archdall. He graduated from Trinity College Dublin in 1853 and arrived in Sydney with his parents and four siblings in December 1853.[2] He associated himself with the fledgling YMCA and for a short time was joint Honorary Secretary with Sharp H Lewis.[3] He contributed to the ministry of the YMCA in this role for some two years and also conducted an evening class in mathematics for the YMCA.[4] Langley was an employee of the Bank of Australasia from about 1857 and around 1858 or 1859 was appointed to look after the branch at West Maitland[5] where he remained until 1868 after which time he moved to the Newcastle branch. He was the manager there until he resigned in 1872 in order to enter Moore College to train for the Anglican ministry.[6] Langley was ordained deacon and later priest in 1873 and served as the incumbent of Berrima with Mittagong, 1873-75; St David’s, Surry Hills, Sydney, 1875-81; secretary of the Church Society, 1880-83;[7] and rector of St Phillip’s Sydney, 1882-1907. He was elected the second bishop of Bendigo and consecrated in January 1907, resigned from the diocese in June 1919, retired to Melbourne and died 11 years later in 1930.[8]

Langley was a busy churchman and was involved in many things within the Anglican Church as well as in the community, but in the 1890s he became very involved in assisting the jobless. By 1890, there was a growing unemployment problem brought on by the conditions that led to a major economic downturn in this period. In February 1890, a meeting of about 500 people, chaired by G E Ardill, met to consider the plight of those who wished to work but could not find employment. A deputation was formed, of which Langley was a member, to wait upon the Minister of Works and to encourage the Government to increase employment through a capital works program.[9] More importantly and more effectively, as the deputation did not receive much benefit from its meeting with the minister, a committee was formed to see what could be done in a practical way to assist the destitute unemployed. By the following month, under the chairmanship END_OF_DOCUMENT_TOKEN_TO_BE_REPLACED

John Sidney played an important role in the nineteenth-century charity scene primarily as a charity secretary but also as a collector, however, little is known about his personal life. He was English and the son of John Sidney, a medical doctor, and his wife Mary nee Johnson.[1] Born in 1846 and living at some stage in Rochester, Kent,[2] he also seems to have been well acquainted with Devon and Cornwall.[3] It is uncertain when he arrived in the colony of NSW, but it was probably sometime in early 1877[4] and it is possible that he had been a member of the London Stock Exchange; he was certainly quite familiar with London.[5] Prior to his arrival in the colony, John had been married in England to Susan (maiden name unknown) but she either did not come with him to the colony or, if she did, she returned to England from NSW.[6] It is most likely that she never came as no trace of her has been found in NSW or elsewhere in Australia. Early in February 1887, a notice appeared in two Sydney newspapers advising that Susan, aged 35, the wife of J Sidney, had died at her father’s residence in Torquay, Devon. No date of death was given,[7] but less than a month later John Sidney married Margaret Thomson Cameron.[8]  At no time, between his arrival and the insertion of the notice of Susan’s death, had John returned to England so it would seem that he and his first wife had been, for whatever reason, estranged.[9] Two male children were born to John and his second wife Margaret, but it seems they died at birth or in infancy as there is no contemporary record of either their births or their deaths. John himself died in 1916 at 70 years of age.[10] At this time he was a recipient of the recently introduced Commonwealth Government pension and was the onsite caretaker of the Royal Society at 5 Elizabeth Street, Sydney.[11]

Sidney’s name is first mentioned in charitable circles in 1877 in association with his role as the collector[12] for the Health Society of NSW (HSNSW), an organisation formed in August, 1876.[13] Henry Burton Bradley was the leading advocate of the Society which sought to alert others to various community health issues within Sydney. Initially employed by Bradley as a collector of funds, John Sidney was soon given the task of investigating public baths in Sydney. His comprehensive report pointed to problems of sewage within the Sydney Harbour and for the need to ultimately find another method of disposing of it. In his report he took the initiative to comment upon the supply of meat and on animal welfare at the abattoir prior to slaughter. He found that at the Glebe abattoir on a hot day, the animals were ‘packed as close as sardines’ which he compared unfavourably to the process he saw implemented in London.[14] His association with the HSNSW was short-lived and he seems to have concluded his role as secretary and collector in 1881.[15] Sidney’s time with the HSNSW, however, began a life-long friendship with Henry Burton Bradley and probably brought him to the attention of the Western Suburbs Horticultural Society of which Bradley was the President. Sidney became secretary for this group in 1878 and retained the position until the end of 1881.[16] His time with the HSNSW also brought him to the attention of those interested in promoting animal welfare in NSW. END_OF_DOCUMENT_TOKEN_TO_BE_REPLACED

In the 1870s, the development of housing for working class single men was an issue that many thought needed to be addressed. To do this a group of philanthropically minded men decided to form a limited liability company with shareholders to address the matter. This charity was different to most and was not, strictly speaking, a charity as those who benefited had to pay for the benefit they received and the shareholders were to receive a dividend from their investment. The project was called the Model Lodging House Company of Sydney (Limited) (MLHL). There was already a Model Lodging House in Melbourne which commenced in 1871,[1] but it proved more difficult to commence one in Sydney. The purpose of the company was ‘to furnish in Sydney accommodation for the poor of the hard-working classes, who have no homes of their own, a shelter by night, both healthful and decent, at a cost which will make the institution self-supporting, and which may in the course of years pay a moderate dividend to the shareholders.’[2] The principle of the MLH was that the working man did not need charity in the narrow sense of the term and so they were determined to make the MLH pay. They did not intend to disparage the broad principle of charity, but they wished to avoid the ‘eleemosynary [Latin for charity] element’ in an institution that should stand alone.[3] 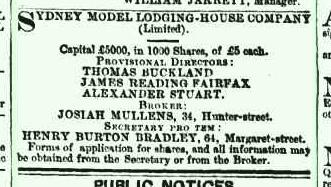 Advertisement for shares in the Model Lodging House, Sydney

First efforts to commence a MLHL were made in 1874 by Alfred Stephen but were unsuccessful.[4]  Henry Burton Bradley (1815-1894),[5]  Secretary of the Health Society of New South Wales (HSNSW) again raised the matter in 1876[6] and under the banner of the HSNSW continued to pursue the matter approaching Josiah Mullens[7] to enlist his support for such a venture.[8] In August of 1877, the HSNSW agreed to attempt to float a company in order to raise the capital to build a lodging house initially to accommodate 100[9] with FH Reuss (Snr) giving his services as an architect to design the building. In February 1878, Bradley, ever positive and hopeful, was reported as saying that commencement of the building was to soon begin.[10]  The company was formed with a capital of £5,000, 1000 shares of £5 each, its directors being Thomas Buckland, James Reading Fairfax, Alexander Stuart with Josiah Mullens the broker, Henry Burton Bradley the Secretary[11] and John Sidney was the collector.[12] END_OF_DOCUMENT_TOKEN_TO_BE_REPLACED