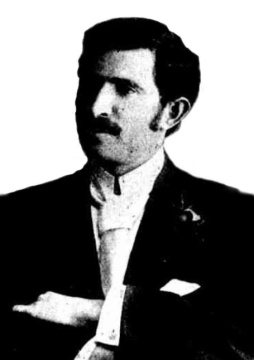 Abraham Samuel Gordon was, in the late nineteenth century, a leading organiser of charity Art Unions in Australia. As early as the 1840s, the Art Union appeared in the colony of NSW when Maurice Felton,[1] an artist, advised ‘his subscribers that the division of his Oil Paintings among the Shareholders will take place THIS DAY, the 14th January 1842.’ [2] This procedure adopted by Felton was modelled on the English practice where an artist sold tickets for the disposal of a body of his works of art. These were raffles where the artist was the beneficiary of the proceeds.

Gordon refined this early process and ran across most colonies of Australia what were, in essence, lotteries for the purpose of raising funds for charity, though some suggested that the main charitable beneficiary of these ‘Art Unions’ was Gordon himself. In the 1890s, a depression hit Australia and unemployment increased as businesses were bankrupted and ceased operation and giving for charitable purposes was significantly reduced as individuals sought to prune their expenditure. This took place against the background of an increasing need for the services of the various benevolent institutions as the unemployed applied for assistance. So when a fundraising opportunity presented itself to various charitable bodies via Gordon’s Art Unions it was, to many charities, a great opportunity to gain access to much-needed funds.

Gordon’s background is obscure. He said that he was born in Szagarren, Russia,[3] which is now in Lithuania, on the Baltic and near Riga where his father was a feldsher[4] (Surgeon) and his mother a mid-wife. He travelled to London when he was 15 or 16 to join his eldest brother and to find work to support himself and said that, consistent with his birthplace, he knew well the Russian, German and French languages and had a fair knowledge of Hebrew and the Talmudic lore.[5] Gordon remained in London for two years, went to Cardiff in Wales then, around 1885, moved to Codoxton ‘where they were building a new dock’[6] and where he went into business with his younger brother Isaac[7] selling furniture, jewellery and fancy goods. He said he was in England and Wales for five years before coming to Australia which would mean he left to come to Australia sometime around 1887. It seems likely, therefore, that he is the ‘Albert Gordon’ who arrived on the Potosi in July, 1887.[8]

Initially, Gordon went door-to-door selling hairpins, bootlaces and jewellery[9] then, in December 1888, he opened a shop in High Street, Bendigo, as a General  END_OF_DOCUMENT_TOKEN_TO_BE_REPLACED